If you Build It…My Current Campaign If you want to start at the beginning.

After a good nights rest the party received information that Beth the Harbourmaster is on the take and has been skimming all transactions with impunity. The party had a choice report Beth ‘Golden hair‘ Anderton to the authorities, in this case, it would be directly to Maximus Crowe, the Captian of the city watch or a Bane suggested approach Beth and blackmail her to get in on the deal.

The party proceeded to the Harbourmaster’s HQ and found it very busy, sailors, merchants and all manner of persons, trying to pay fees, arguing about the high prices of the fees, bartering and haggling. It is a wonder that ships move in and out of the harbour at all. The commotion at the waiting tables in the main hall was just short of a riot. The party managed to grab a passing paper pusher and ask about meeting with Beth, after a little golden grease, peppered with subtle threats, the party was taken to the back office to meet the one and only Beth ‘Golden hair‘ Anderton.

She was standing behind a large wooden desk covered in papers, three little halflings with ink-stained fingers their heads buried in ledgers crunching numbers so loudly you could almost hear them sitting at little desks against the walls, did not even turn to see the menacing group that was just let in, now taking up a good half the room. 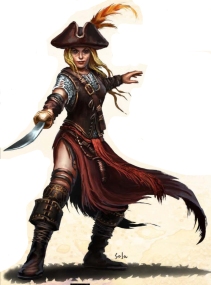 The party opens by pointing out that they could very easily report their knowledge of her skimming off the top of every import and export going through the harbour to the city council and that would be the end of her unless she cuts them in on the deal.  A bit of intimidation from the group of four and she agrees on one condition. They need to get Maximums the Captain of the city guard off her back. She tells them that he has been investigating her for years, ever since she turned down his marriage proposal trying to get enough on her to blackmail her to marry him or leave the city in shame.

The party proceeded to Maximum’s house following directions that were given by Beth. When they arrived outside the Captain’s place they noticed it was very dark inside as if the Captain had already turned in for the evening. As a group, they crept up to the front door and Bane reached out to test the handle, the door was unlocked so they let themselves in. A quick search of the first floor found the place to be empty, they proceeded upstairs and could hear snoring coming from a closed door at the end of the hall. The heavily armoured party members decided to go downstairs an wait in the kitchen for Bane and Anders to bring Maximum down to them. Bane burst into the room as quietly as a breeze and shoved a pillowcase over the sleeping man’s head. Which of course woke him, but it was too late Bane and Anders had full control of the victim.

Bane shoved Maximum into the kitchen and onto a chair, the party closing in to surround their target. After a few tough words from Bane and Tulth, it became apparent to Maximum who was behind this, he started to try and cut them a deal, to remove Beth and place them in charge of the harbour, when they began to discuss the pros and cons of this offer as a group, Maximum interrupted, yelling loudly, offering that if anyone in the room would turn on the fellows, immediately and work to free him he would reward them greatly. This was too much for Tluth’s sense of honour and he plunged his sword through the back of the chair and clean through the naked city Captain. Looting and smashing things in the house on their way out to make it appear as a burglary, the party heads back to the Harbourmaster while making sure they are not followed. They explain what happened, about the captain attacking them and they had to defend themselves ending in his death. Beth keeps her word and offers them a cut in her business, increasing the value of their operation many-fold as well as providing ways to import and export black market items.